I love my dark beers, and if I’m honest, prefer them to many of the cloudy, hop milkshake, American type IPAs that you seem to get everywhere today. So here is how I brewed an old fashioned style London Porter derived from a Fuller’s 1880 recipe. The recipe I have used is based on one from Graham Wheeler’s book called “Brew Your Own British Real Ale”, 3rd Edition, and was published by CAMRA in 2009. As well as using traditional English hops, this will be an all-grain brew using kilned malts only. No additional sugars or adjuncts are used. The brewing method is as pure to traditional English brewing as you can get in a home brew setup!

The origin of how ‘Porter’ got its name is an unsolved mystery subject to much speculation. The usual explanation is that it was named after the London street porters of the 18th and 19h centuries. This has never really been proven. Originally, when this beer was made it was stored for some time to mature. Graham Wheeler suggests that the name may come from the Latin “potare”, which was probably chalked on the wooden casks when the beer had matured enough and was fit to drink in the sense of being potable.

A word on the ingredients
The Fuggle hop originates in England and was first discovered in 1861 in a hop yard owned by George Stace in Kent. Some 14 years later it was officially named and introduced by Richard Fuggle of Benchley in 1875. Similar to a Styrian Golding, it is noted for its distinct European aroma and has enjoyed a long, versatile run. At its peak nearly 100 years ago Fuggle was known as a dual-use hop, used both for bittering and aroma. Today however, as other higher alpha acid varieties have become more prevalent, it’s now more prominently used for its aroma. In this recipe it is used for both.

Maris Otter Ale Malt is a traditional, two-row, low-protein, winter barley variety with deep roots in English brewing. It is today considered the keystone malt for authentic British ale flavors. It was first bred in 1966 by Dr G. D. H. Bell, the director of the British Plant Breeding Institute (PBI), which was then located on Maris Lane, in Trumpington, England. Maris Otter is considered a very “malty-tasting” pale base malt, which has made it a favourite among traditional cask ale brewers for decades. Using Maris Otter, brewers are able to create beers of relatively low gravity and alcoholic strength, such as “ordinary” bitters, while retaining a genuinely malty flavour profile. After its introduction, Maris Otter quickly became popular with brewers because of its low nitrogen content, excellent malting homogeneity, and good enzymatic strength, which makes it easy to malt and mash.

Traditionally Brown Malt was produced on a special kiln which was heated by wooden poles and faggots. Hornbeam faggots were the most commonly used, cut to 5 foot lengths, and burnt to give the malt a harsh, smoky and biscuity flavour. Because of the lack of availability of these specially prepared brushwood faggots, all Brown Malt produced in the UK is now made in the roasting drum. It is sometimes referred to as ‘drum-brown’ and is cooked at a low temperature to impart a dryer and less sweet character than Crystal Malt of the same colour. Its uses are generally restricted to specialist bottled beers, brown ales and sweet stouts.

Crystal malts are specialty grains that add flavour and colour to any brew. These malts are used in many beer styles, from pale ales to porters, and are the most widely used type of specialty grain. You can use crystal malt no matter what type of homebrewer you are — extract, partial mash or all-grain. Adding crystal malt is a common way to add a sweet flavour to beer. The sweetness of crystal malt has distinct caramel tones to it. Crystal malts also add body to your beer.

Special B Crystal Malt is the darkest of the Belgian crystal malts. This malt will impart a heavy caramel taste and is often credited with the raisin-like flavours of some Belgian Abbey ales.

Black malt primarily gives a highly roasted flavor, that carries some bitterness and acidity. But it can also show a deep fruity character reminiscent of currants, blackberries or sultanas. It gives deep contrast to a round malty beer by giving it some elbows, without being pushy. Most importantly, even in very small quantities, it provides a drying quality that brightens up the finish of any beer.

Here is the recipe:

Water adjustment:
You may remember in my last article I wrote about the need to get the water right for brewing purposes. When I brewed the English Pale Ale we needed water that was high in sulphates and low in chlorides. When brewing a porter the salts need to be the other way round. This helps to give a porter the roundness of flavour and the smoothness we expect from a dark beer. So in parts per million (ppm) this is what the brewing water (liquor) looked like after my adjustments:
Calcium (Ca) 113
Magnesium (Mg) 5
Sodium (Na) 27
Sulphate (SO4) 70
Chloride (Cl) 174
Thus giving a chloride to sulphate ratio of 2.4:1.

Now for some pictures of the brewing equipment and the process.

For this brew, I am not using my normal 3 vessel setup as shown in the November posting, but using a one-vessel system called a Braumeister. This is really a large, stainless steel version of a simple BIAB system (Brew-In-A-Bag). You still need an HLT (Hot Liquor Tank) for sparging. Here’s a picture of the setup: 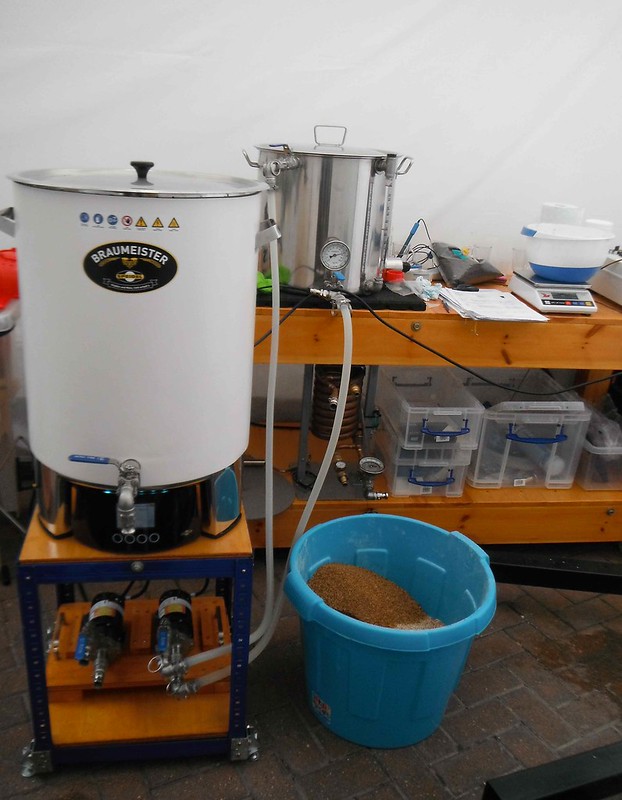 This is the home made control panel that I use to control the Braumeister and the HLT: 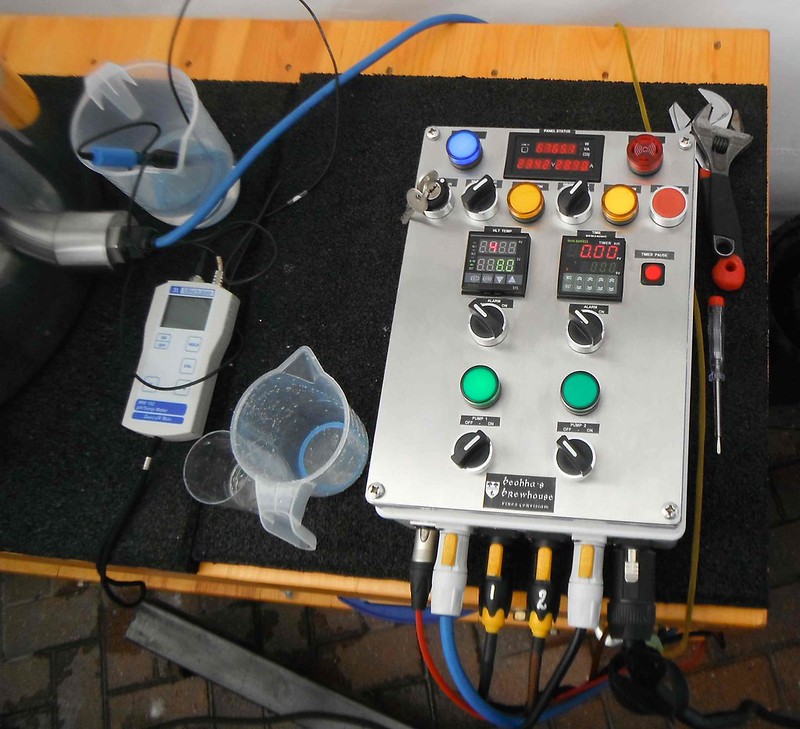 Here’s what the grains look like after crushing and before adding to the mash process: 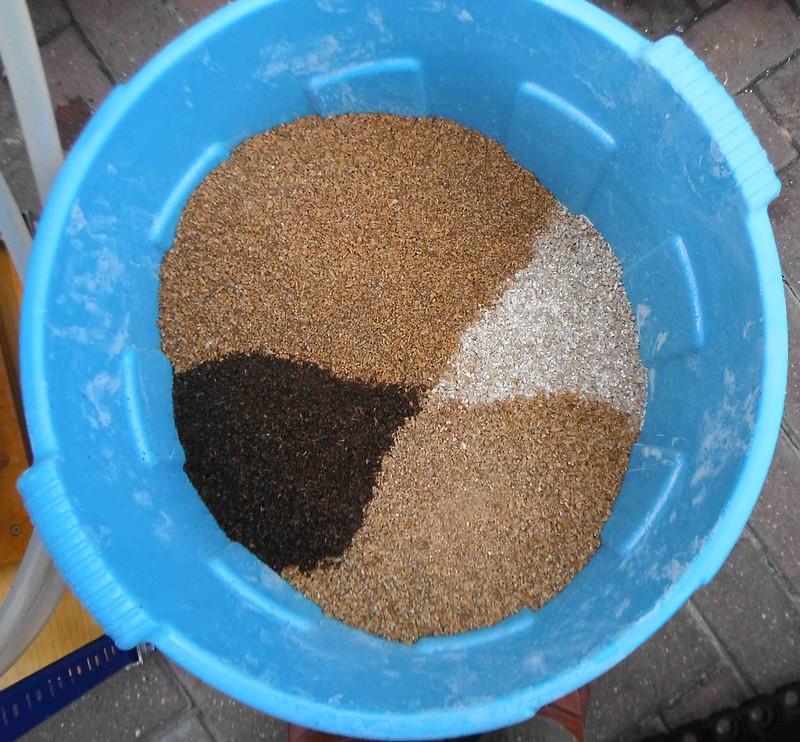 After the mash is underway for 20 mins, it’s time to check that the pH is right for the conversion of the malt starches to fermentable sugars: 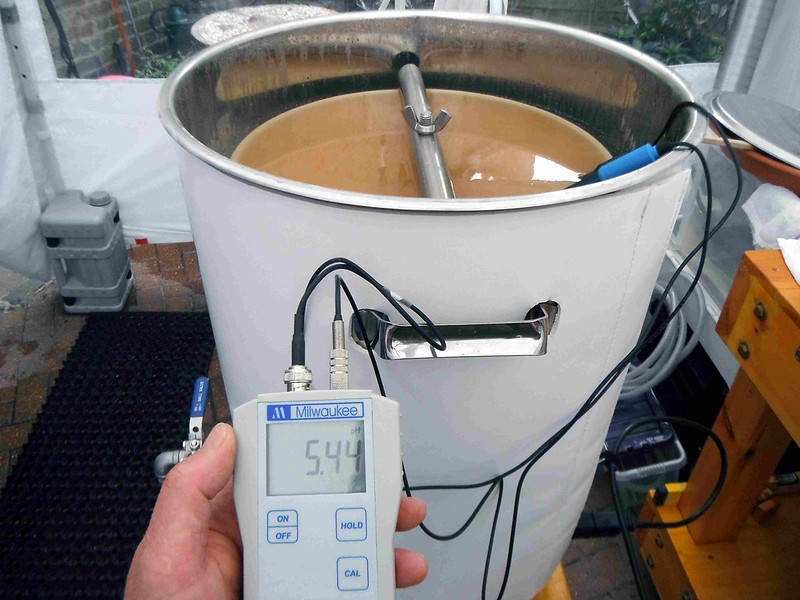 This is a view inside the Braumeister showing the mash liquor rising up the inner tube: 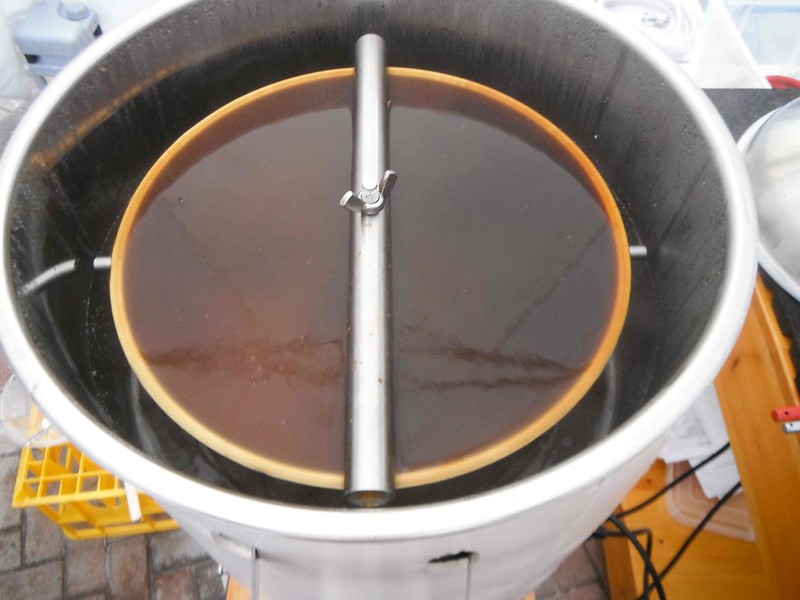 Once the mashing is over, the inner metal tube containing the malt grains has to be raised to do the sparging (grain rinsing). Full of soaked grain, this tube can be very heavy and needs some kind of hoist to lift it. I use a small car engine hoist: 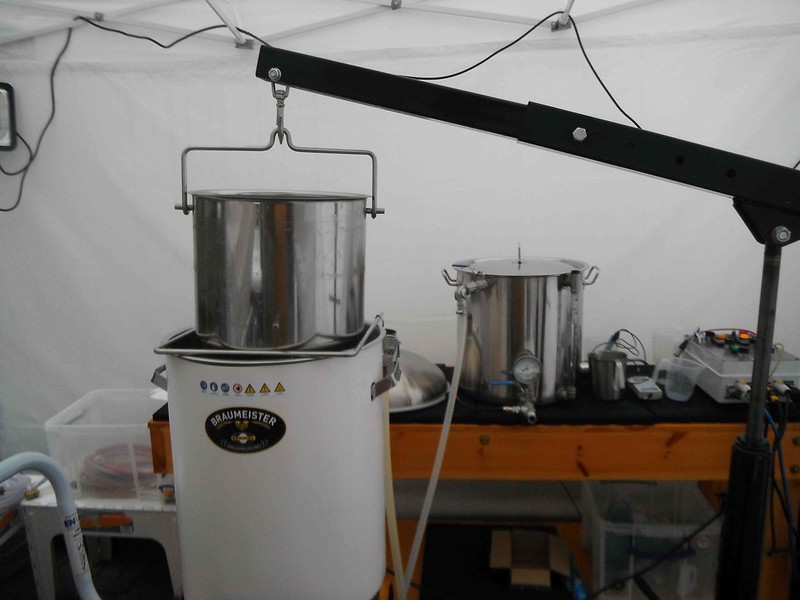 Pumping the finished wort after the boil into the fermenter via the cooling coil: 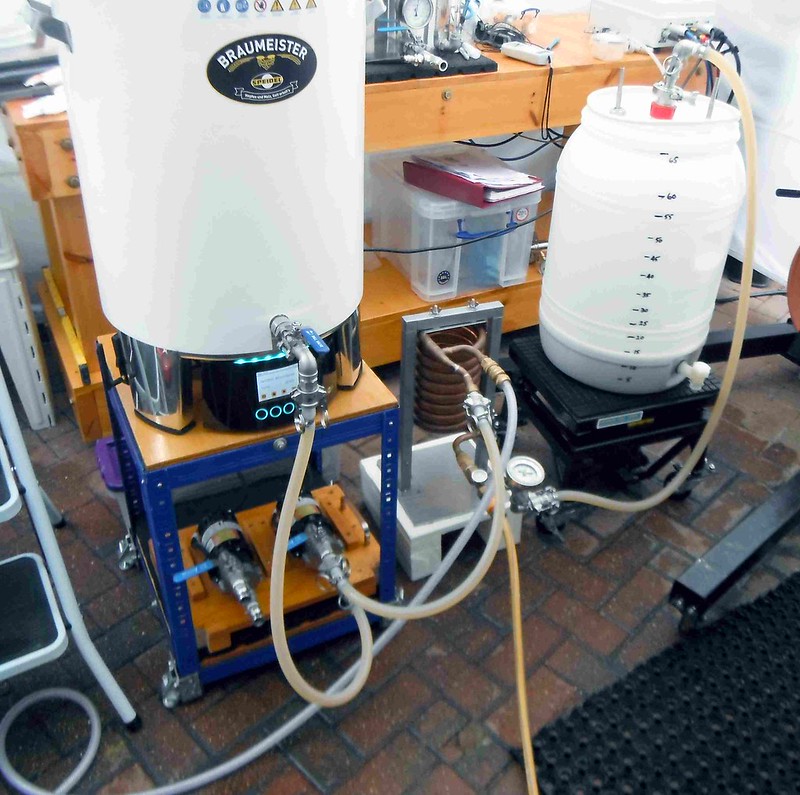 This is a view of the spent hops left after finishing the hop boil and draining off the wort to the fermenter: 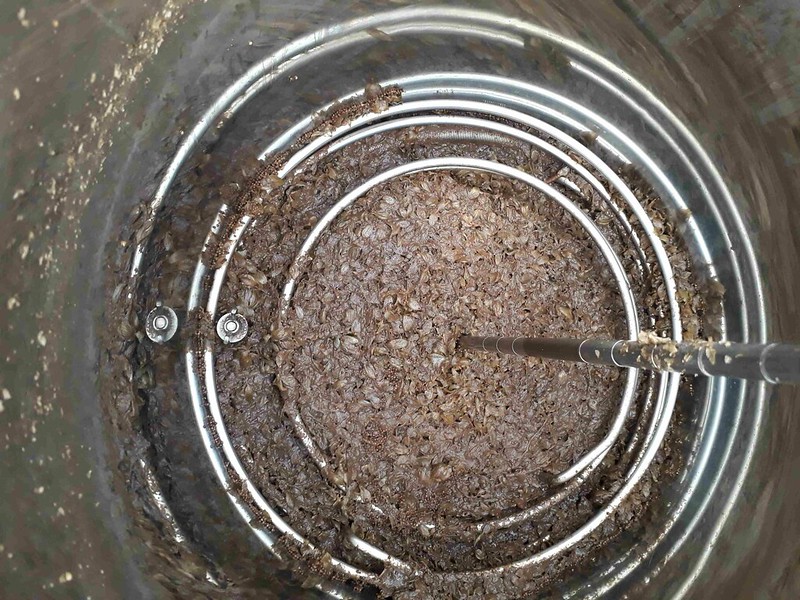 Well, that’s it for now. This beer turned out really well for me and I won second prize with it in a recent national brewing competition. For further explanation of the brewing terms have a look at the end of this article “Brewing an English Pale Ale” on my HOME page. If you do make this beer, drink it slowly and give a thought to Graham Wheeler. Thank him for the rich brewing knowledge that he so willingly shared in his lifetime.