Remember those small chalk boards that used to hang in some old pubs listing the beers? Well, I found a site that gives you a free digital version.

Here is my board: Beers on tap at Beohha’s Brewhouse

Here is the website to create an account and build your own free board: Simple Digital Beer Menus

So now on to part 3, which is brewing a Brown Ale of the Northern variety. The first gyle, a barley wine, was made as a “no sparge” from the first runnings, and will take a few years to age properly, but here I want to make a session ale that can be enjoyed right away. This will be made by adding more liquor to the previous mash grains in the mash tun, adding additional crystal and roasted malts, and steeping/vorlaufing the new mix for 30 mins before running off. Here are the recipe details:

Here’s a picture of the grains in the mash tun left after the run-off from the first brew: 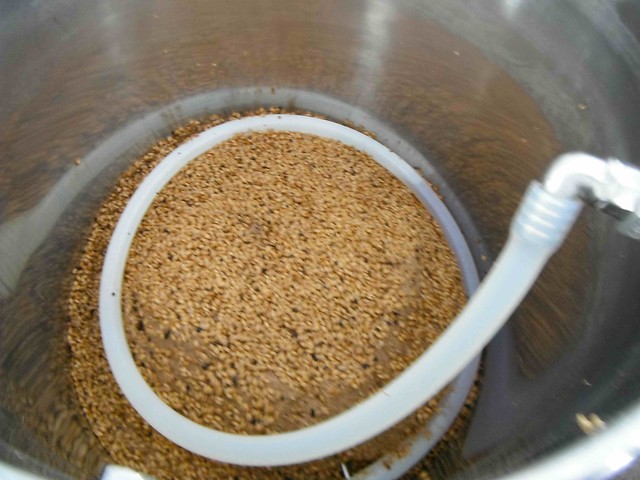 The next batch of crystal and roast grains ready to be added: 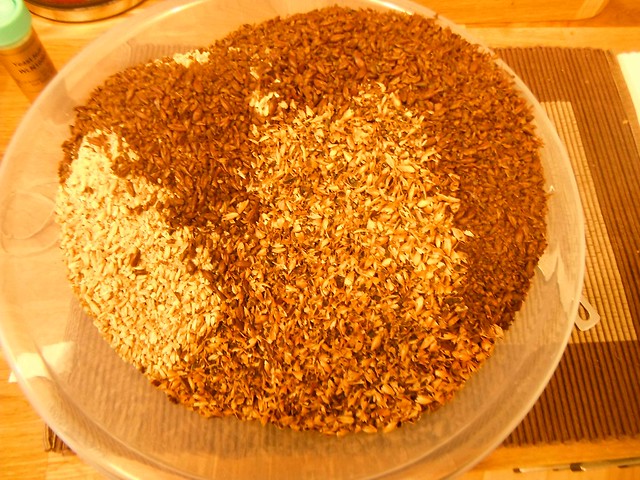 I am using a fairly new grain that has recently appeared on the home brew market – Golden Naked Oats. This a huskless oat crystal malt described as an “Exotic ingredient for a subtle nutty difference”. The sales jargon for this grain says:

“Sweet berry-nut flavour. Use to add a deep golden hue, light caramel flavours, and a creamy, satiny finish. This unique product from Simpsons has a special, sweet berry-nut flavour. Used at a rate of 4-15% of total grist by weight, Golden Naked Oats will deliver a deep golden hue with light caramel flavours to the finished beer as well as a creamy, satin finish.”

Sounds good, if not poetic! We shall see what difference it makes when it comes to the drinking.

Here’s a shot inside the mash tun just after finishing the vorlauf and before run-off into the boil kettle: 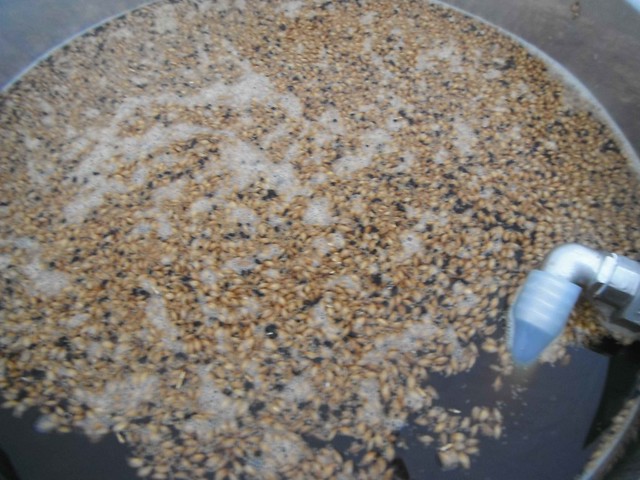 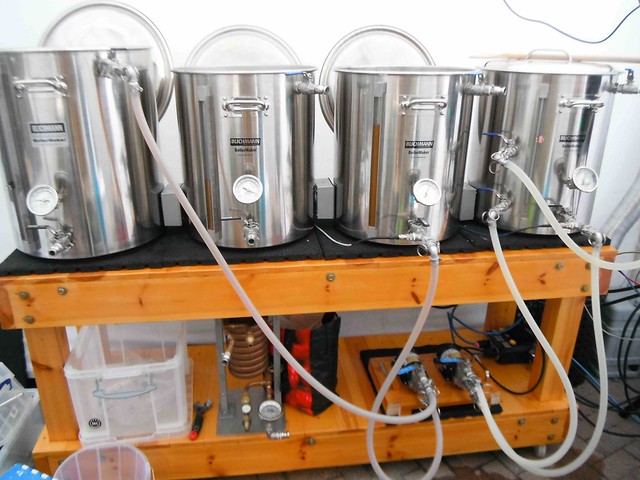 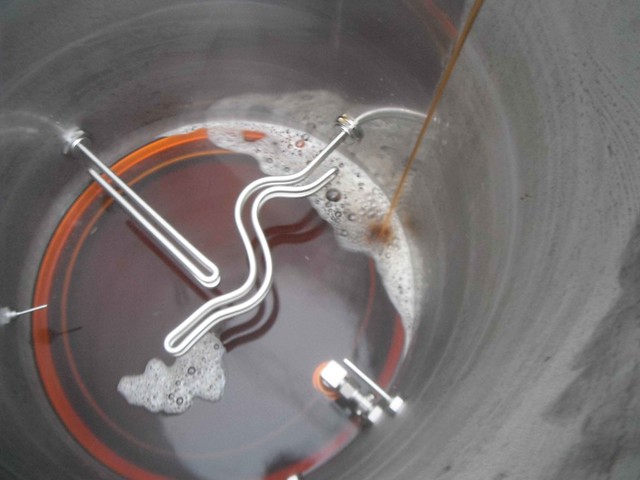 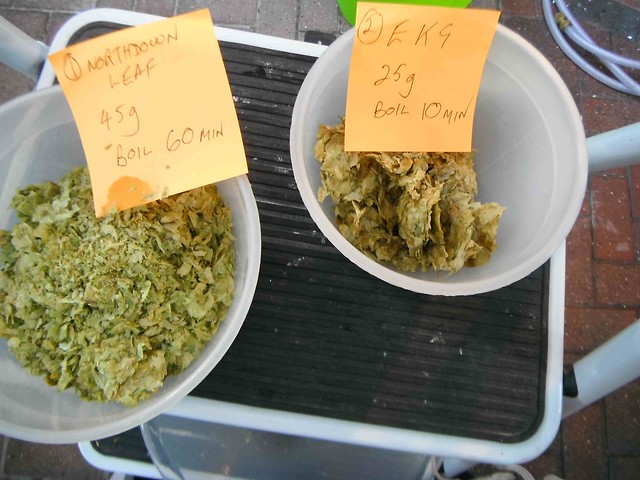 After the 75 min boil, a picture showing the cooling and running into the conical fermenter: 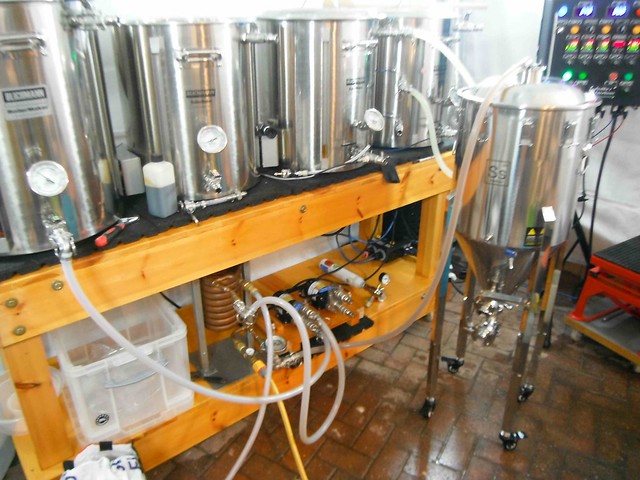 As in all my brews, pure oxygen was pumped into the chilled wort using a wand airstone for 60 secs before pitching. Final collected wort was 32L at an OG of 1.043.

So, now that my first parti-gyle brewing session is all over, what do I think? As compared to the standard one-off brew, it can be quite complicated. You have to keep several proverbial balls in the air at the same time, for instance, there are two boil kettles to watch and you need much more treated water. That can involve a double set of water calculations tailored to each brew, as the first and second runnings have a different composition, and not just of sugars. It is also hard to work out, and consequently plug into brewing software, the brewing and mash efficiency for the second brew as you cannot tell with any accuracy the sugars remaining in the ‘spent’ grains.

On the plus side, the second brew gyle does not have to be “re-mashed”, as all the conversion has already taken place. This makes it much quicker to do multiple brews. I would never be able to do two full brews in a day with the normal all-grain mash process.

The main lesson learnt with my parti-gyle session was in under estimating the potential liquor absorption by the grains. I found that initially the mash tun level for the second brew was about 5L short. I also miscalculated the temperature drop when I added the hot treated water from the HLT to the second gyle grains. The steeping temperature dropped to 70C instead of 76C, so my steeping and vorlauf extraction may have fell slightly short on gravity points. At this point I had used all the water from the HLT in refilling the mash tun, so I could not recirculate the mash liquor through the HLT HERMS coil to heat it up.

Having tried the parti-gyle method though, I can say that it was immensely enjoyable and I feel I have earnt another brewer’s stripe to go on my arm. And yes, I would do it again – I am already thinking of a strong Scotch ale and a dark mild parti-gyle. Finally, a picture of the contented brewer, weapon in hand, at the end of a hard day’s work, as taken by SWMBO. 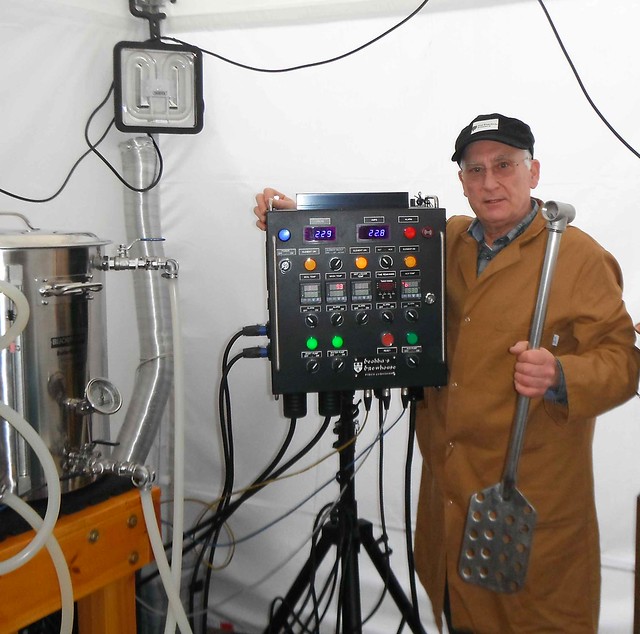 I went through the prep work for my parti-gyle brew in my last post.

The first beer from the parti-gyle was an English barley Wine, hopefully along the lines of Thomas Hardy’s Ale when fermented and conditioned. Here’s the ingredients: 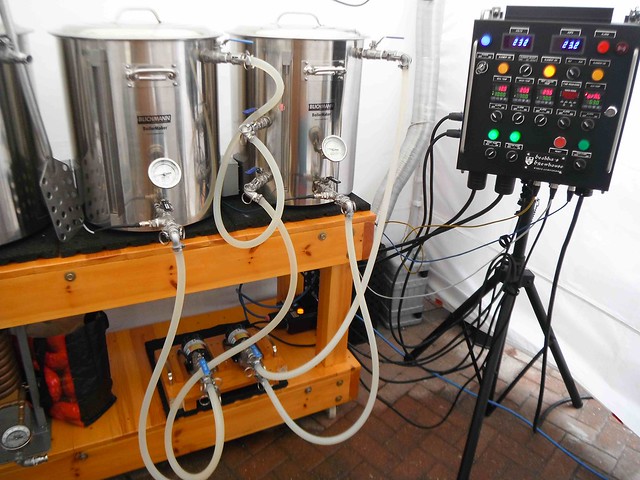 By connecting up in this way I can get two lots of water heated for the two brews at the same time. The mash tun is filled with the Barley Wine mash liquor (48L) and the HLT is filled with 60L of liquor for the second brew, which will be steeped and not mashed. The liquor in the HLT is heated up by recirculating from bottom to top, while the mash liquor is circulated via the HLT coil and heats up in that way.

Grains ready to go into the mash tun: 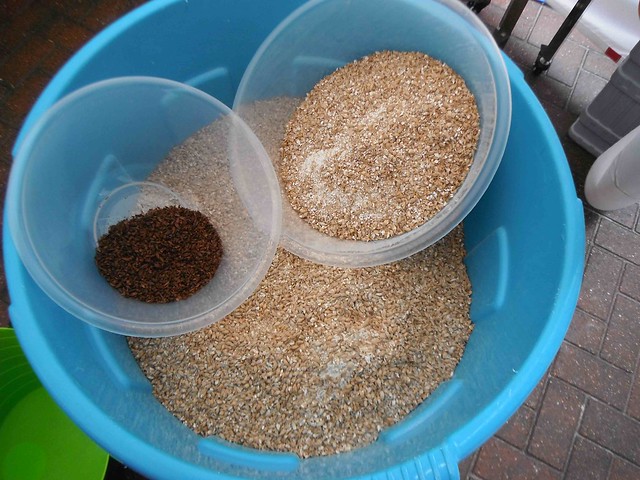 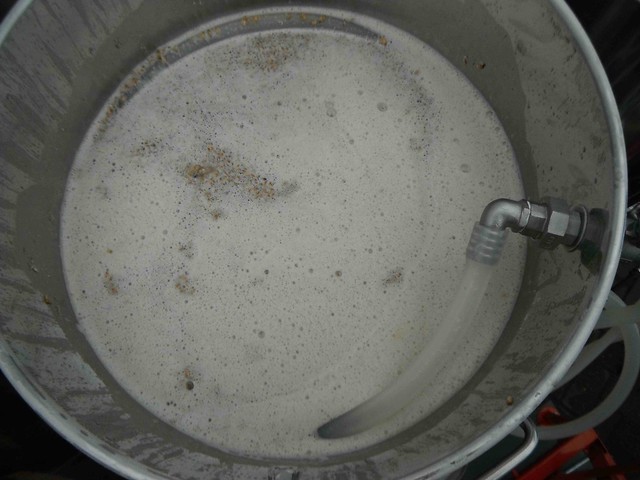 Pumping into boil kettle after mash is finished: 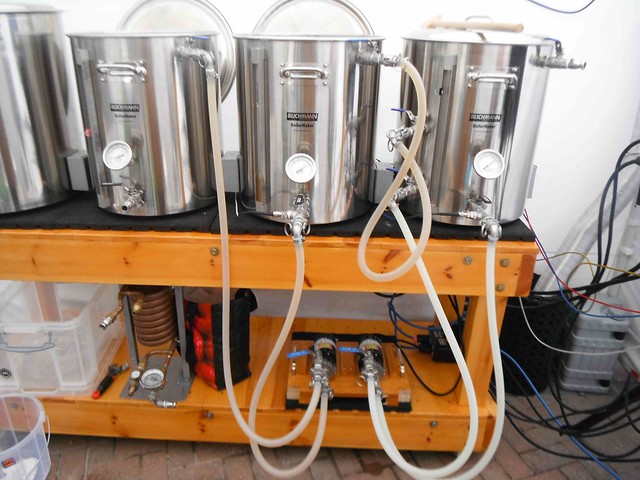 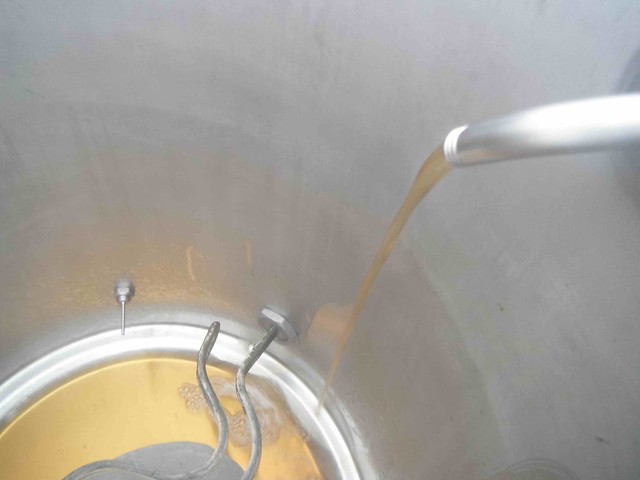 Hops all weighed out ready to add to kettle: 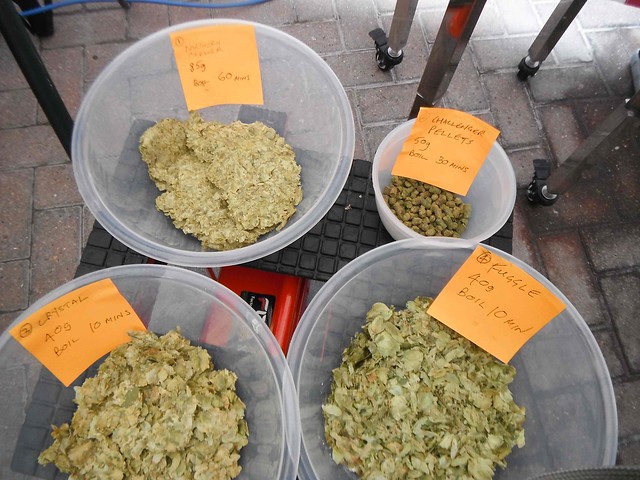 Running into the fermenter and cooling with the CFC to 20C: 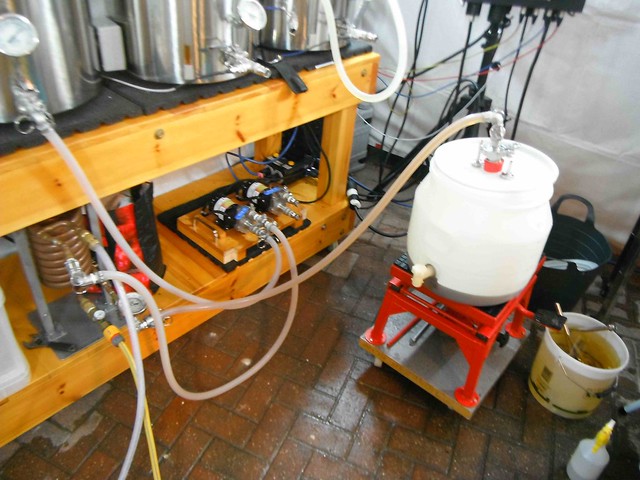 The OG ended up at 1.123, which was spot on the target. That’s enough writing up for the moment. Part 3 – the second runnings – will follow shortly. 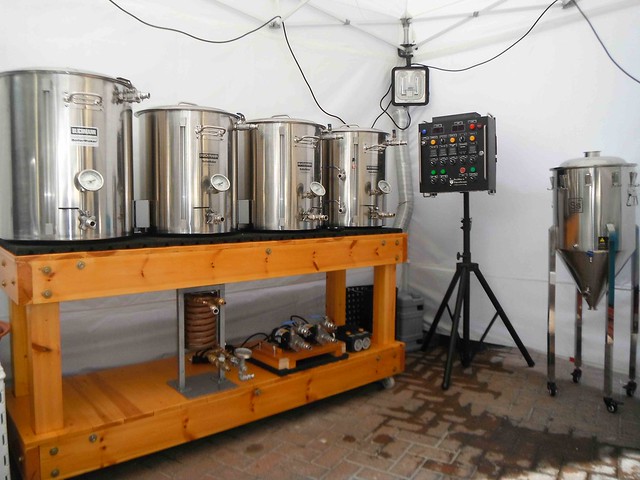 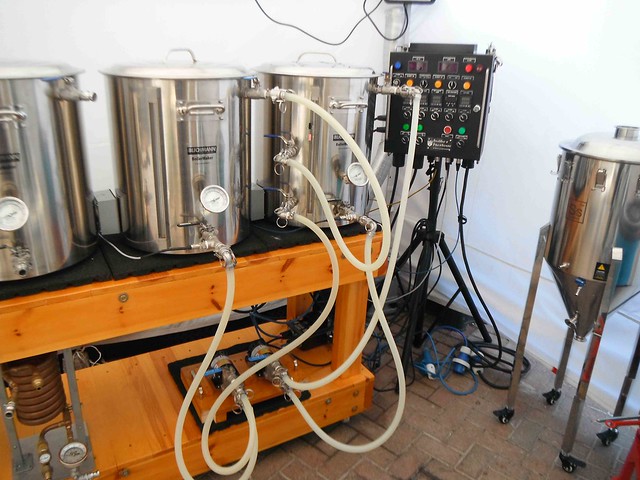