I have just brewed two beers as a personal remembrance to Graham Wheeler. The first was a German Pilsner style beer modelled on Graham’s recipe for ‘Jever Pils’ from his book “Brew Classic European Beers At Home” (1995). This beer has rich aromas of malt and hop. With a delicate and refreshing balance of malt and hop in the mouth, leading to a dry finish with a pleasing blend of hop and honey sweetness. Here is my pump clip label:

The second was taken from Graham Wheeler ‘s “Home Brewing” book (1990) and modelled on his recipe for an old style porter. This black beer has a biscuity, nutty flavour with a chocolate and roast coffee background. The hops are quite pronounced and give a fruity and spicy character. Pump clip label: 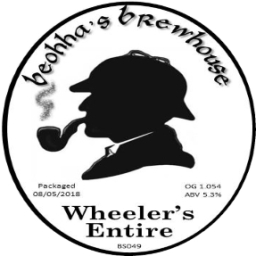 If you are wondering about the ‘Sherlock Holmes’ image above, Graham was rather camera shy and used this particular silhouette as his on-line avatar in brewing forums.

I will sup these two beers slowly and give a thought for Graham, who inspired so many to brew their own quality beer in defiance of commercial blandness. They are brewed in commemoration of his life and with thanks for the rich brewing knowledge that he shared.  Sadly, he left this world to become ‘Supreme Beer Cicerone’ on 30/11/2017. RIP.