I thought it was some time since I did one of my long distance pub hikes, so on Saturday 15 June I did a 15 mile walk from Maidstone to Rochester. First pub stop was as soon as I left the train at Maidstone East. A nice pint of Ruddles in the Wetherspoon “Society Rooms” at 09:48: 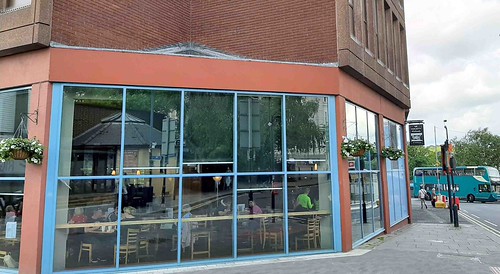 Maidstone is a quaint town, but I didn’t have time to explore its streets: 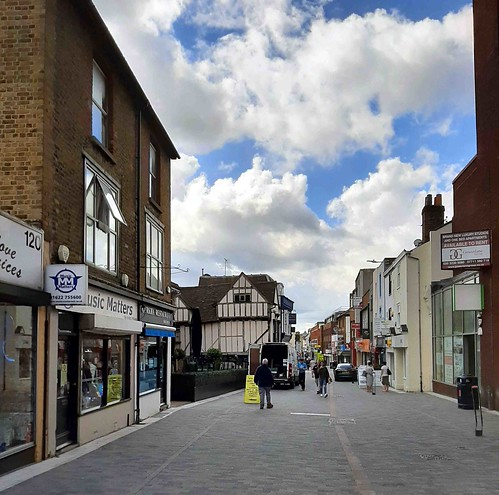 I followed the path from the station to the River Medway and was greeted with this view looking southward as I walked down the steps to the river tow path: 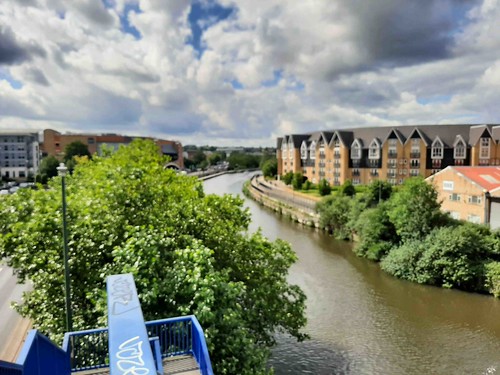 But this isn’t the way I wanted to go as I was walking north towards Allington Locks. 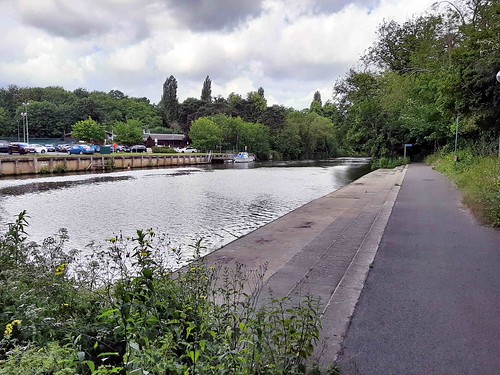 And soon enough my second pub came into sight, The Malta Inn:

I find the lock machinery at Allington quite fascinating:

As did this cute swan family of mum and dad with eight signets:

I quickly walked through the picturesque old town with its noisy traffic and entered the flat river meadows and marshes:

I was now approaching nearby Burham, which nestles between the Medway and the North Downs. It felt about right for another pint, so I diverted slightly off route to The Butcher’s Block at Burham and a nice pint of Old Dairy:

Walking past the ancient church of St. Mary’s at Burham, I was soon once again in the riverside marshes.

Walking through the desolate marshes I came across the memorial stone, set up as a monument to the Battle of the Medway in 43 AD, when British tribes under the command of Caratacus tried to halt the advancing Roman legions and failed.

The wide sweep of the river

soon brought me to the new dwellings of Peter’s Village.

Lovely houses, but no pubs here I’m afraid. Still it was a good place to sit and eat my lunch – a large chunk of homemade cottage pie.

A quick tally of my pints so far revealed I had only managed to sink four – hardly my normal pint per mile. So I hastened on towards Wouldham, where I knew two good pubs awaited me.

Sure enough, the first pub at Wouldham was The Medway Inn and a good pint of London Pride:

Only a short hop from here to the the next great Wouldham pub, The Waterman’s Arms, and a gorgeous pint of Spitfire Gold:

From Wouldham, I took the high ground up to the North Downs ridge and then my descent towards Rochester:

passing some old square oast houses on the way:

As I passed through Borstal, I remembered The White Horse on the way and was pleased to see it still thriving:

And this is where I met my new friend Frank – a rather gorgeous French Bulldog puppy whose coat colour is known as ‘blue’:

And now the final sweeping approach to Rochester and its famous bridge, still privately owned would you believe!

I fought hard in Rochester, but the pubs came thick and fast and I was unable to beat them off:

First two up, right next to each other so I had no chance, were The Jolly Knight and The King’s Head:

and a pint of St Edmunds

I realised now I was not going to win this battle, so after a quick glimpse of Rochester Cathedral for divine guidance,

I dragged myself into The Smoke Liquor for a bottle of smoked porter – gorgeous!

Now having decided I was truly defeated, I finished off at The Two Brewers and The Eagle Tavern:

I fought a good battle, but decided to yield at this point having imbibed a total of 15 pints during the day. So eventually I did meet my pint per mile target. I got home at 21:30, was kicked about a bit by SWMBO, and went off to bed to have a fine sleep. An excellent day out. Soon to be repeated I hope by going along the Medway in the other direction southwards from Maidstone to Tonbridge, but that will be another tale!